Xanthus provides comprehensive engineering consulting services for the novel and evolving world of the Smart Grid, including integration of systems, interoperability standards, and cyber security 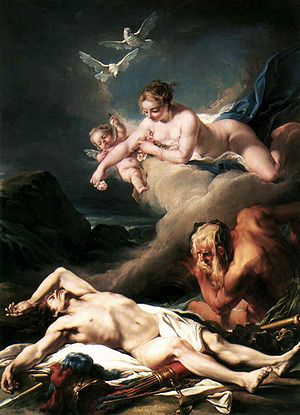 "Hector Exposed on the Banks of the Xanthus River", 1759, by Jean-Baptiste-Henri Deshays (Musée Fabre, Montpellier)

Where Does the Name Xanthus Come From?

In Greek mythology, Xanthus was the name of Achilles horse, the offspring of Zephyrus, the west wind. Xanthus was given the power of speech by the gods in order to tell Achilles who had killed his friend Patroclus.[1]

Correlation of this story with the services of Xanthus Consulting is left up to the imagination of the reader ...

What Services Does Xanthus Provide?

Xanthus provides comprehensive engineering consulting services for the novel and evolving world of the Smart Grid, including integration of systems, interoperability standards, and cyber security.

Quotation from the Iliad

“Xanthus, Balius,
you famous children of Podarge, this time
make sure you bring your charioteer back safely
to the Danaan army, once we’ve had enough
of battle. Don’t leave him out there slaughtered,
as you did Patroclus.”

From under the yoke,
his swift-footed horse called Xanthus spoke to him,
ducking his head down quickly, so all his mane
streamed down from underneath his shoulder harness
beside the yoke towards the ground. Goddess Hera
gave Xanthus power to speak:
“Mighty Achilles,
on this occasion we will bring you safely back.
But the day you’ll die is fast approaching.
We won’t be the cause, but some mighty god
and a strong fate. It was not our laziness
or lack of speed which helped the Trojans
strip that armour from Patroclus’ shoulders.
A powerful god born to Leto killed him
among those fighting at the battle front,
then gave Hector glory. The two of us
could run as quickly as the West Wind’s blasts—
men say they are the fastest thing there is—
your fate still stays the same, to die in war,
killed by a mortal and a god.”
Once Xanthus had said this,
the Erinyes removed his voice. Then Achilles,
in a fury, said to his horse:
“Xanthus,
why do you prophesy my death? There is no need.
I know well enough I’m fated to die here,
far from my loving parents. No matter.
I will not stop till I have driven the Trojans
to the limit of what they can endure in war.”